Emigration: Over one million left the country in the last 14 years – Portugal 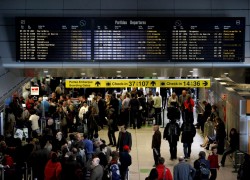 More than one million Portuguese emigrated in the last 14 years, it was reported Wedenesday. It is the second largest emigration wave since the beginning of the millennium, only surpassed by the emigration wave registered in the 60’s and 70’s of last century.

Recently, the Secretary of State for Communities, José Cesário, estimated between 100,000 and 120,000 the number of Portuguese who had left the country last year, adding that the number may have increased further in 2012.

Although no one is sure of how many have already left, various other estimates put the numbers at an average of between 50,000 and 100,000 departures per year.

A group of economists surveyed by Lusa have concluded that new emigration trend may be a “safety valve” for the crisis, but will also cause “serious problems” for the future of the Portuguese economy.

According to economist João Ferreira do Amaral, the new wave of emigration poses a “very big problem for the future” with the aging population. “Those who remain are older. This is very problematic for the future,” he warned.

The government budget for 2013 has projected a rise in unemployment above 16.4 percent, with the number of jobless expected to continue rising into new year.