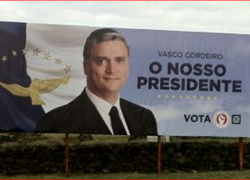 Vasco Cordeiro, 39, was elected Sunday Regional President of the Azores, with an absolute majority of 49% of votes.

Cordeiro, the leader of the Socialist Party (PS) in the Azores, won 31 out of a total of 57 parliamentary seats for his party.

A total of 12 political organizations were represented in the Sunday ballot. Abstention was estimated at about 50%.

In a recent poll, Cordeiro was the projected winner with an absolute majority of 41,9%  of votes against Cabral with 35%.

Cabral, 59, is the former Mayor of Ponta Delgada city and the regional leader of the Social Democratic Party (PSD) in the Azores.

The social democrats (PSD) had won 18 of a total of 19 precincts in the Azores in the June 5 national elections, which elected Portugal’s Prime Minister Pedro Passos Coelho, the national leader of the Social Democratic Party (PSD).

The regional legislative elections held Sunday, elected a new legislative assembly and government leader to replace incumbent socialist Carlos César, 16 years in office as the President of the Regional Government of the Azores .