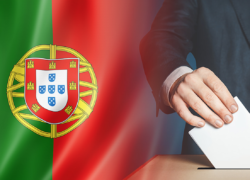 The Socialist Party (PS) was the overall winner from the Sunday Portugal’s municipal elections. With 99% of the ballots counted, the total results are not yet officially out.

However, after 14 years the Socialists, which have governed Portugal since 2015, have lost the municipality of Lisbon, which went to the opposition Social Democratic Party (PSD). They have also lost seven municipalities, which switched their political allegiance to the PSD for the first time since 1976.

Besides Lisbon, the major leadership changes are Coimbra, in mainland Portugal, and Funchal, in Madeira, which mayoral seats changed from the Socialists to the Social Democrats.

In the Azores, although ballot results kept the PS in the lead, the Socialists have lost nine of the 19 municipalities to the Social Democrats, three less than in 2017, while the PSD won eight, alone and/or in a coalition with minority parties.

Overall, the Socialist Party, Portugal’s dominant political force, headed by Prime Minister António Costa, took 34.4% of the vote and 147 municipalities across Portugal, whereas the PSD took 24% on its own and/or in alliance with the CDS-PP. The third position went to the Communist Party with 8.2%, followed down by the Left Bloc with 2.8%.

The far-right Chega Party won 4.2% of the vote and zero municipalities, failing its goal of becoming the third-largest political force.

More than 9.3 million Portuguese were registered to vote in the country’s 308 municipal elections with more than 20 parties competing. As projected, abstention reached about 47%, the second highest with 46.35% of voters not going to the polls. The figure was only surpassed in 2013, when a record 47.40% was reached. The population of Portugal is estimated at about 10.28 million (2019).

Among those registered to vote are 29,814 resident foreign citizens, 13,924 of whom are from Member States of the European Union and 15,890 from third countries, namely Cape Verde, Brazil, the United Kingdom and Venezuela. The estimated 5 million Portuguese expatriates are not allowed to participate in Portugal’s municipal elections.