Elections: Berta Cabral to step down as leader of the Social Democratic Party – Azores 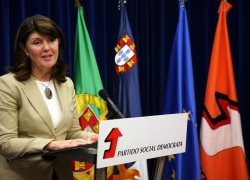 In a statement to the Portuguese American Journal, Berta Cabral confirmed her intention to resign as leader of the Social Democratic Party (PSD) in the Azores.

The former Mayor of Ponta Delgada, and former candidate for President of the Government of the Azores, Cabral will make a formal announcement on Monday to the Regional Committee of her party.

According to several sources, Cabral will be replaced by Duarte Freitas, the favorite on a list of candidates which also includes the names of Maria do Céu Patrão Neves, Pedro Nascimento Cabral e Pedro Gomes.

Berta Cabral, 59, was defeated by the Socialist Party (PS) candidate, Vasco Cordeiro, 39, who was elected Regional President of the Azores, on October 14, with an absolute majority of 49% of votes.

The regional legislative elections also elected a new Legislative Assembly. Cordeiro will replace incumbent Socialist Party (PS) Carlos César, 16 years in office as the President of the Regional Government of the Azores.