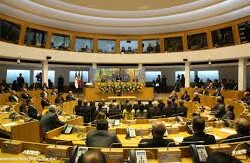 Polls project that Vasco Cordeiro will be reelected on Sunday, October 25, President of the Government of the Azores, with an absolute majority, following regional legislative elections for the new Regional Legislative Assembly.

President Vasco Cordeiro is the leader of the Socialist Party (PS) in the Azores. This would be Cordeiro’s third term as President of the Government of the Azores.

Cordeiro is running against José Bolieiro the leader of the Social Democrat Party (PSD) the major opposition force in the Region.

He was first elected on October 14, 2012, with an absolute majority of 49% of votes, replacing former incumbent Socialist Party Carlos César, after 16 years in office.

The Socialist Party (PS) has governed the archipelago for 24 years and had held an absolute majority in the region’s Parliament for two decades.

Azorean legislative elections are taking place on the nine islands of the archipelago, with 228,999 registered voters choosing among 13 political factions, competing for 57 seats in the Legislative Assembly of the Autonomous Region of the Azores. Abstention was estimated to be high above 50%

There is a total of ten constituencies in the Azores – one for each island, plus the compensation circle, which coincides with the entire area of the region. Only six of the 13 parties in the race are competing for all circles: PS, PSD, CDS, BE, CDU and PPM, all of which already have a current seat in the regional parliament.

PAN, MPT, Aliança, Livre, Enga, Liberal Initiative and PCTP / MRPP are some of the minor parties also presenting themselves to voters.

When available, elections results will be posted here.

Terceira Island is the second most populous in the archipelago, with 55,179 inhabitants. In other words, almost 80% of the archipelago’s population is concentrated in São Miguel and Terceira: 192,408 people.

The Azores could lose more than 70,000 residents in the next 60 years, according the National Statistics Institute (INE), which has project that the Region could go down from the current 242,846 to 170,969 residents by 2080.

On aging, São Jorge is the oldest island and the only one that exceeds the national ratio, with 165 elderly people for every 100 young people.

As for the average life expectancy, Azoreans live on average almost three years less (77.9 years) than the rest of Portugal (80.8).