Elected: President Dos Santos to be sworn for five term in office – Angola 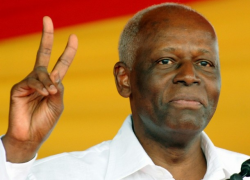 President José Eduardo dos Santos is to be sworn President of Angola, for a five-year term in office, Wednesday, following the Angolan Constitutional Court’s announcement that all appeals presented by opposition parties were dismissed as groundless.

The official final results of the 31 August polls gave dos Santos and his MPLA party 71.28% of the votes.

The vice-presidency goes to Manuel Vicente and the ceremony will take place in the Praça da República.

President dos Santos in power since 1980, has been accused of avoiding public scrutiny and doing too little to fight corruption and of mismanaging the country’s oil revenues.

An estimated two-thirds of Angola’s 16.5 million people live on less than $2 per day in a country which is Africa’s second-largest oil producer after Nigeria.

President Dos Santos, 68, has ruled the African country for 30 years and is the ruling MPLA party’s 2012 presidential candidate. He is the continent’s longest serving leader.

In 2010, Dos Santos signed into law a new constitutional provision allowing him to extend his three-decade-long rule.