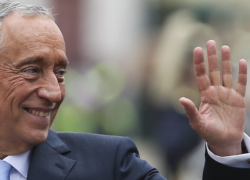 Absenteeism was high with a turnout of 45.45%, a decrease of 4.6 percentage points when compared to the 2016 election, which was the lowest drop in turnout in an election with an incumbent running since 1980.

The election was held amidst a severe COVID’19 surge, making Portugal currently the county with the world’s highest rates of new daily infections and deaths per 100,000 population, according to Johns Hopkins University.

Rebelo de Sousa, a center-right moderate, devoted most of his victory address to the COVID’19 victims, promising to work to heal the country and restore the economy.  “Everything starts with the battle against the pandemic,” he said.

During his former mandate, Rebelo de Sousa was criticized for working too closely with the rival center-left opposition minority Socialist government, lead by Prime Minister António Costa, in partnership with a left leaning coalition.

Marcelo Rebelo de Sousa was first elected President of the Portuguese Republic in the first round on January 24, 2016, earning 52% of the votes cast, replacing Aníbal Cavaco Silva, who served the limit of two five-year terms. A former Law professor, journalist, and political TV commentator, he is the leader of the opposition Social Democratic Party (PSD), governing in cohabitation with the leader of the Socialist Party (PS) Prime Minister António Costa. A former member of the European Parliament, he has been a career politician in and out government since the 1970s. In Portugal, according to the Constitution, the head of state has limited authority, beyond veto power and dissolving the Parliament if a crisis occurs.

Portuguese voters abroad – Portugal was one of the first countries to extend voting rights to her emigrants. The external vote was recognized following the establishment of democracy in 1974, with the election of representatives of the emigrant community in the legislative elections of 1976.

There are an estimated 1.375 million Portuguese nationals residing abroad with a potential right to vote (2017). About 22% of Portuguese nationals live outside the country (2017). In addition, if emigrants’ descendants are factored in, the Portuguese communities abroad would consist of about five million people.

Participating in a presidential election requires travelling to Portuguese diplomatic representations, which is particularly difficult in large countries, such as the United States, where the network of consular representations is scarce.

Yet, many Portuguese abroad could vote, in person, on January 23 and 24, for the next president, at 171 voting polling locations, in 150 consular services, in more than 70 countries — an increase of 30% in relation to the number of polling stations set up in 2016, which was 121,  — according to the Ministry of Foreign Affairs.

About 1.4 million individuals living in the United States today are of Portuguese ancestry, with a large percentage coming from the Azores. Presently, there are sizable communities mostly in Massachusetts, Rhode Island, New Jersey, Florida, Louisiana, Nevada, California, and Hawaii.