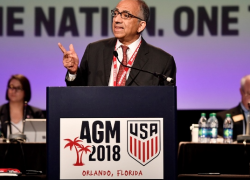 A former Goldman Sachs banker, he succeeds Sunil Gulati, who held the presidency since 2006.

Nine candidates entered the race for the position, of which eight were cleared to run.

Cordeiro won easily on the third ballot with 69 percent of the vote, conducted in a conference room at the Renaissance Orlando SeaWorld. He becomes president immediately.

“I think we are at an inflection point in soccer history in this country,” he remarked after his victory, andhe added, “I think we have an opportunity to really transform it into a number one sport. I think the demographics favor that.”

His ultimate goal is to help soccer realize its vast potential in the United States he said.

“There’s a reason why the millennials identify with soccer, so I think that’s very much in our favor. We have to do a number of things ourselves to make it happen, and make it happen more rapidly,” he said.

Carlos Cordeiro, 61, was born in India to a Portuguese father and a Colombian mother. Self-proclaimed to be of Colombian-Portuguese-Indian heritage, he arrived in the United States with his widowed mother at the age of 15.   He was a board member of the United States Soccer Federation since 2007, where he served as vice president and on a variety of committees. He has been a Goldman Sachs executive where he has served as Vice-Chairman Asia. He continues to be associated with the company through a position as an honorary advisor.

Watch the stream of the event here.