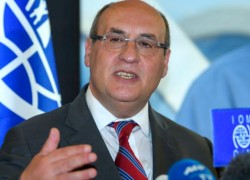 Portuguese carrier politician, António Vitorino, former European Union commissioner, was elected on Friday, as the next Director General for the International Organization for Migration (IOM).

With one exception from 1961 to 1969, IOM has been led by an American president through the agency’s 67-year history. Ken Isaacs was eliminated after three rounds of voting. IOM, the UN Migration Agency, is the leading inter-governmental organization in the field of migration.

President Trump’s chosen candidate, Ken Isaacs, affiliated with the Christian charity Samaritan’s Purse, was linked to serious anti-Muslim bigotry charges in social media. He was critical of Islam, calling it a violent religion, and expressed doubts about climate change. Isaacs has apologized in response.

“The election of António Vitorino is of great importance to Portugal in an area as important and sensitive as migration,” said President Rebelo de Sousa, in a statement posted on the president’s website.

“Portugal continues to assume responsibilities in the management of migration with the election of António Vitorino as Director General of the International Organization for Migration (IOM), for which I warmly congratulate him,” Prime Minister António Costa twitted.

“The Portuguese Government has no doubt that António  Vitornio is the right person to lead the OIM in this difficult period and that his management will prioritize the promotion of peace and security, tolerance, respect for human rights and sustainable development, which Portuguese foreign policy is likewise orientated towards.” Augusto Santos, Ministry of Foreign Affairs, said in a statement.

António Vitorino, who will take over the post in October 1, 2028, will succeed US diplomat William Lacy Swing, who has run IOM for the past decade and has held senior State Department and United Nations posts over a career spanning half a century.

António Manuel de Carvalho Ferreira Vitorino, 61, a lawyer by training, served as Portugal’s Minister for National Defense (1995) and Deputy Prime Minister in the mid-1990s in the government of current UN Secretary-General António Guterres.