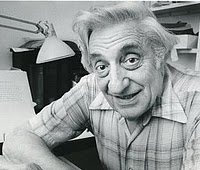 Edwin Honig (1919-2011), a translator of Portuguese poet Fernando Pessoa, died May 25, at his home in Providence, RI, of Alzheimer’s disease.

A poet, critic, playwright and translator, he taught at Brown University for over 25 years before retiring in 1983.

He wrote 10 books of poetry, 3 plays, 5 books of criticism and 8 translations one of the earliest of which was on Spanish poet Federico Garcia Lorca.

Honig also translated many plays, including those of the 17th-century Spaniard Pedro Calderon de la Barca and those of his 16th-century countryman Miguel de Cervantes.

He was knighted by the Spanish and Portuguese governments for his lifelong dedication to their national literatures.