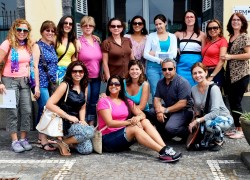 A group of 15 Portuguese language teachers in the United States has completed an intensive professional development program at the University of the Azores, in Ponta Delgada, São Miguel island. Participants included teachers from California, New Jersey, New York, Massachusetts and Rhode Island.

In its second edition, the program was co-sponsored by the Luso-American Development Foundation (FLAD), the Instituto Camões and the Regional Government of the Azores, through its Direção Regional das Comunidades (DRC), in collaboration with the University of the Azores and the Association of Teachers of Portuguese in the United States and Canada (APEEUC).

According to Antonio Oliveira, one of the coordinators of Instituto Camões in the United States, the goal of the program is to provide teachers with the professional development they need to teach Portuguese language and culture at all levels, throughout the country. Oliveira estimates that currently over 40 thousand students are enrolled at all levels in Portuguese language classes in the United States.

“Portuguese has become an important language for international communication.  In the Americas, Portuguese stands out as the third most spoken European language. In the United States the interest in learning Portuguese continues to grow and we feel the need to give adequate response to this demand. There is also the need to recognize its status as a global language. Portuguese is spoken in the seven countries that form the Lusophone world, a cultural and linguistic universe which has become a significant market with endless opportunities in the coming decades. So, these programs are very important because they provide teachers with the adequate pedagogical tools they need to teach Portuguese in a world of new realities” said Oliveira.

Organized by Professor Graça Castanho of the University of the Azores, the program included a curricular section aimed to improving teachers’ competencies and a cultural section to acquaint teachers with the culture and traditions of the Azores. The program integrated various multidisciplinary workshops, visits to public and private institutions including museums, libraries, meetings with educators, artists and writers, and a cultural immersion program of field visits.

Francisca Silvia Lima, originally from Brazil, teaches Portuguese at the International Charter School, in Pawtucket, Rhode Island, where many of her students have roots in the Azores. She believes the program offered her the opportunity to learn more about the Azorean culture, which, she said, will greatly enhance her teaching.

For Vanja Rangel Cavalcanti, a native of Rio de Janeiro, Brazil, teaching Portuguese in Manin, California, the program provided her with the opportunity to experience the Portuguese language and culture from a different perspective in a different context.  “I really appreciated the academic aspect of the program and everything else. I absolutely adored being here,” she said.

Stephanie Silva, teaches at the Icahn Charter School 3, Bronx, New York, NY. For her, this was a professional trip which provided her with new tools to better teach Portuguese. “Being here opened my eyes to more opportunities. Not just to teach the language but to teach culture, traditions, and nature. It has made me want to learn more and explore more. If I am given the opportunity to return or complete another professional trip, I will,” she said.

Alice Pimentel Almeida has been teaching English as a Second language, Spanish and Special Education in the New York City public education system for 22 years. She also teaches Portuguese at the D. Nuno Alvares Pereira School, the local Portuguese heritage language school. For her the program expanded her knowledge about teaching the Portuguese language and culture focusing on the Azorean culture and traditions. “I am very thankful to Professor Graça Castanho and all those involved with this program. This was an unforgettable experience,” she said.

Originally from Brazil, Raquel Amorim teaches at Northwestern University where she has noticed that more students are enrolling Portuguese language classes. “Increasingly students in the areas of businesses and international relations are learning Portuguese as a foreign language because of their awareness that the language opens up new opportunities for them to work in a globalized economy,” she said.

Stephanie Maria Francisco is a Portuguese-American, teaching Bilingual Elementary Education at Ann Street School, in Newark, New Jersey. She also teaches Portuguese at the local Union Portuguese Language School. She attended a Portuguese heritage language school and studied in Portugal at the University of Coimbra. “Being a product of a Portuguese heritage school myself, my own accomplishments often served as an example for my students today. Professional development opportunities such as this are fundamental in helping teachers to continue to learn new methodologies. I also hope to share with my students the cultural experiences I had in this paradise that is the Azores,” she said.

Limited to 20 participants, the program is administered and certified by the University of the Azores and qualifies participants to receive PDPs through Lesley University.  Teachers of Portuguese language and culture at the elementary, secondary and university levels in United States are encouraged to apply next year. Costs are estimated at about US$4,000 per participant to include fees, flights, accommodation, meals and local transport. Scholarships are available to selected applicants through the Luso-American Development Foundation (FLAD).

To see the images click on any thumbnail and than
click on Next or Back
Click on any picture to enlarge to full screen or to return to regular size.

(*) Carolina Matos, is the founder and editor of Portuguese Portuguese American Journal online. She was the Editor–in-Chief for The Portuguese American Journal, in print, from 1985 to 1995. From 1995 to 2010, she was a consultant for Lisbon based Luso-American Development Foundation (FLAD).  She graduated with aBachelor’s Degree in Liberal Arts and a Master’s Degree in English and Education from Brown Universityand holds a Doctorate in Education from Lesley University. She is also an adjunct professor at Lesley University where she has taught undergraduate and graduate courses. In 2004, Carolina Matos was honored with the Comenda da Ordem do Infante D. Henrique, presented by Jorge Sampaio, President of Portugal.