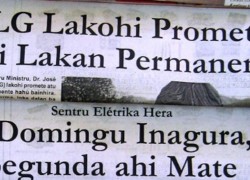 The National University of East Timor and the University of Coimbra, Portugal, will work together to develop Tetum, the Timorese national language.

According to Lusa news agency, an accord between the two institutions was signed Friday, in Dili, the Timorese capital, by representatives of both universities.

“We’re absolutely determined that this collaboration will function with quality,” the University of Coimbra’s rector, João Gabriel Silva, said at the ceremony.

His Timorese counterpart, Aurélio Guterres, described the agreement as a new step toward cooperation between the two institutions.

On regaining its independence from Indonesia, East Timor, a former Portuguese colony, adopted Portuguese and Tetum as its official languages, along with English and Indonesian Bahasa as working languages.

Dili’s efforts to reintroduce Portuguese, after it was banned from teh country for nearly a quarter century by Indonesia, is a centerpiece of the accord.