Earthquake was felt on Faial – Azores 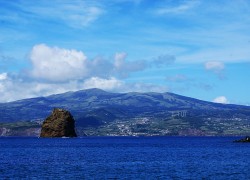 An earthquake measuring 3.9 on the Richter scale was felt in Faial, Azores, Monday morning. There is no record of any damage or injury. The earthquake occurred at 8:23 AM in the northwest village of Ribeirinha.

Earthquake occurrences are common in the Azores, for the most part registered at sea and not felt by the population.

The most recent notable earthquake event took place in 1998, measuring 5.9 on the Richter scale, in the Riberinha area of Faial, causing large destruction and killing eight people. The last major volcanic eruption was in 1958 in Capelinhos, Faial.

The Azores are sitting on the so called “Azores triple junction” area where the North American, Eurasian and African plates meet. This area is responsible for frequent geological and vulcanic activity on the islands.

Periodic volcanic eruptions and earthquake events, with occasional tidal waves, can have devastating effects on the Azorean islands. All the islands of the Azores are still volcanically active — except Santa Maria — which is farthest away from the Mid-Atlantic Ridge.