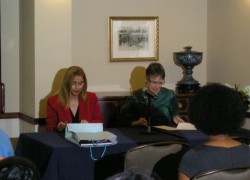 Graça Castanho, Director of the Department for Azorean Communities (DRC), of the Government of the Azores, visited George Washington University (GWU) Friday to sign a memorandum of understanding which objective is to better integrate the history and culture of the Azores in the Portuguese language teaching curriculum.

“It is very important that the curriculum to teach Portuguese at the George Washington University also includes the Azorean history and culture. The Azores played a very important role in the history of Portugal which should be acknowledged,” she said. George Washington University has a large international student population and for Graça Castanho “there is a great potential at the university to promote the Azorean islands at the international level.”

At George Washington University, Graça Castanho met with the President of the university and Professor Joseph Levi, the head of the Portuguese Language Department. She also met with students and representatives from Portuguese-speaking countries diplomatic representations in Washington, DC.

In Washington, over the weekend, Graça Castanho held a meeting with representatives from the Portuguese American Citizenship Project (PACC), a non-profit organization that encourages Portuguese residents to become U.S. citizens in order to participated in the political process through the righ to vote. At PACC, Castanho spoke of the importance for the Azorean immigrant community to acquire US citizenship in order to fully participate in the American political process, the only way that guarantees their full citizenship rights.

Earlier in the week in Cambridge, MA,  Graça Castanho attended the 1st International Symposium on Human Rights and Quality of Life in the Portuguese-Speaking Communities in the United States and Canada, an initiative promoted by her office.

In Rhode island, Castanho participated in the celebrations of the 20th Anniversary of Casa dos Açores da Nova Inglaterra (CANI) where she promoted the  “Ao Colo da Língua Portuguesa” program with a gift of a few hundred children’s books. The “Ao Colo da Língua Portuguesa” is an educational project that supports Portuguese language learning at home for children of Azorean immigrants through reading.

Castanho will be meeting with representatives from the Azorean resident community in Newark, NJ, before returning to the Azores Tuesday.