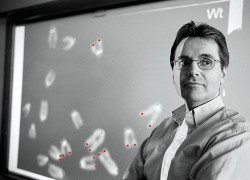 Portuguese American scientist Dr. Ronald A. DePinho, MD, 56, was chosen as the sole finalist to succeed John Mendelsohn as the next president of the M.D. Anderson Cancer Center, at the University of Texas in Houston.

The son of Portuguese immigrants, Dr. DePinho is a Harvard University cancer geneticist,  the director of the Belfer Institute or Applied Cancer Science at the Dana-Farber Cancer Institute in Boston, and a professor of medicine and genetics at Harvard Medical School.

Internationally renowned, Dr. DePinho specializes in molecular and biological processes behind the development of cancer, aging and degenerative diseases. He is known for his research on how genes control cancer and for reversing aging in mice.

Dr. DePinho received his MD with distinction from Albert Einstein Medical College in 1981. He later completed his research training at Columbia Presbyterian Hospital.

Dr. DePinho on The Colbert Report