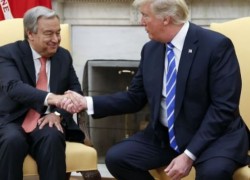 The former Portugal’s Prime Minister, who had a brief first contact with President Trump in the White House last April, visited the White House for a more formal meeting

This time the two leaders addressed “issues of common interest,” including the reform of the United Nations.

In September, during the meetings of international leaders at the UN General Assembly, President Trump and Secretary Guterres had addressed the subject, a priority for the White House.

“I have a feeling that things are going to happen with the United Nations like you haven’t seen before,” President Trump said Friday.

Speaking to Secretary Guterres , President Trump said, “You have done a very, very spectacular job at the United Nations. And I can tell you, speaking for the United States, we appreciate it.”

Although President Trump praised Secretary Guterres for the initiatives taken to improve the functioning of the organization his administration wants to reduce the US economic contributions to the organization, of which it is the largest funder.

The United States is the largest UN financial contributor, with 22 percent of its basic budget of $ 5.4 billion and 28 percent of the $ 7.3 billion of the peacekeeping budget.

Reportedly, North Korea, Iran and the Middle East were also among the topics discussed by the two leaders.

In past interventions, Secretary Guterres has made clear his support for continuing the nuclear deal with Iran, which Washington is threatening to withdraw.  He has also voiced criticism of some of President Trump policies, such as immigration and refuges, climate change and has lamented the recent decision by the United States to leave UNESCO (United Nations Educational, Scientific and Cultural Organization).

Posing for reporters, PresidentTrump told Secretary Guterres: “I just wish you luck because the potential that you have is really unlimited. Good luck.” Guterres responded, “I need all the luck.”

President Trump laughed: “You need luck, and you need talent, OK? You need talent, and he’s got the talent. Now, we’ll see what happens. I’ll report back to you in about seven years what I think,” he concluded.

António de Oliveira Guterres, 68, who will be the ninth secretary-general in the 71-year history of the United Nations, is a career politician who also served as president of the European Council (2000) and president of the Socialist International (1999-2005). As UN High Commissioner (2005-2015), he headed one of the world’s largest humanitarian organizations with a budget over USD $6.8 billion (2015) and more than 9,000 staff, working in 123 countries, providing assistance to over 46 million displaced people worldwide. A charismatic orator he is fluent in three of the U.N.’s official languages (English, French and Spanish) in addition to Portuguese. The UN Secretary-General is charged with promoting sustainable development, working for peace around the globe, protecting human rights and dealing with humanitarian catastrophes. António Guterres will serve well as the next world top diplomat.