Diplomacy: Portuguese Government will not cave in to US pressures – Portugal 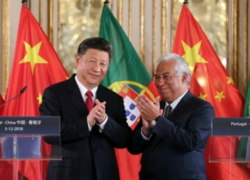 The Portuguese Minister of Foreign Affairs, Augusto Santos Silva, warned the United States Ambassador in Lisbon, George Glass, that the decision-making process in Portugal belongs with the Portuguese Government and will not abide by US pressures.

The head of Portugal’s diplomacy reacted to statements by the United States Ambassador who, in an interview with the weekly Expresso, urged that “Portugal choose between its friends and allies and China.” One of the main focus of the Expresso interview was the new 5G technology.

“In Portugal, the decision-makers are the Portuguese authorities, who decide which are Portugal’ interests, within the framework of the Constitution and Portuguese law,” Santos Silva told Lusa news agency.

Ambassador Glass said in the interview that the US would prefer that Portugal would not acquire any 5G equipment from Huawei, stressing that if the Chinese company brings the 5G  technology to Portugal, the defense agreements between Portugal and the United States could be affected.

He warned of consequences for Portugal choosing to work with China which he said could influence NATO’s activity or the exchange of classified information. He further threatened to end the distribution of natural gas through Sines if the construction of the new terminal is delivered to China.

Asked whether Ambassador Glass’s statements could be considered an interference in Portuguese internal affairs, Santos Silva argued that he did not, evoking the “good relations” between Portugal and the United States.

“We are part of the EU, NATO, the West, we have privileged relationships with Africa, with Latin America, with different regions in Asia and so on, acknowledge by our allies. And they know that we are allies at all times, not on occasion. We are reliable and credible allies,” Santo silva said.

In telecommunications, 5G is the fifth generation technology standard for cellular networks, which cellular phone companies began deploying worldwide in 2019, the planned successor to the 4G networks which provide connectivity to most current cell phones.

China Portugal relations  can be traced back all the way to 1514 during the Ming Dynasty of China. Relations between the modern political entities of the People’s Republic of China and the Portuguese Republic officially began on 2 February 1979. China and Portugal established the comprehensive strategic partnership in 2005