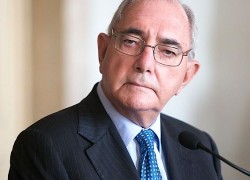 The Portuguese Minister of Foreign Affairs, Rui Machete, is on a two-day visit to Iran to hold talks with Iranian President Hassan Rouhani and meet with cultural and business leaders in the country.

According to Machete, the objective of the visit is to address “common interests and concerns” and to boost cooperation between Portugal and Iran. This is the first visit of a Portuguese diplomatic delegation to Iran since 1975.

In Tehran, Machete commended President Rouhani for all the reforms he has undertaken. “Hassan Rouhani has succeeded in depicting a new image of Iran on the international scene and highlighted Iran’s role in the region by increasing relations and proposing initiatives,” he said.

“We totally encourage the talks started with Iran, and support a negotiated solution that can allay international community’s concerns and at the same time acknowledge Iran’s rights to adopt its policies,” he said.

Machete also revealed that establishing direct flights between Lisbon and Tehran was under consideration and that an agreement could be reached soon.