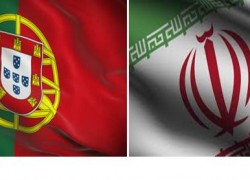 “The Portuguese government expresses its congratulations on the agreement reached in Vienna today on the Iranian nuclear program and takes this occasion to praise the negotiators acting on behalf of the international community – Germany, China, the United States, France, the United Kingdom and Russia, under the leadership of the High Representative Federica Mogherini – and Iran for reaching this conclusion,” the statement said.

The agreement reached “culminates over 12 years of negotiations and demonstrates, as Portugal has always maintained, that the solution for the Iranian nuclear question could only ever be reached by means of negotiation,” the statement concluded.

During his visit, Machete said that all countries, including Iran, were entitled to have access to civilian nuclear technology. In the foreign minister’s words, Portugal “totally encouraged” the intensifying talks aimed at a negotiated solution.

At the time of the visit, a memorandum of understanding was signed under which the University of Lisbon and the University of Tehran will establish educational and research exchange programs for students and professors. Direct flights between Lisbon and Tehran were among the other subjects discussed.