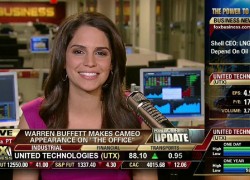 By Beth Santos, Contributor(*) — You may have heard of Diane Macedo, and if you follow FoxNews.com you’ve definitely seen her work.  Online news editor and now a reporter and anchor for Fox Business Network, Diane has moved over a very short period of time from being a Guest booker for Fox News Radio, to a news editor and reporter for FoxNews.com, to on-air broadcaster and household name.

But did you know she’s a Portuguese American?

“I grew up in a very Portuguese town,” Diane says of her childhood home in Mineola, NY. The daughter of immigrant parents from the Minho region of mainland Portugal, Diane grew up speaking Portuguese, dancing in the local rancho and being a part of the Portuguese community there. “It’s almost like my entire town is family,” she says. “The Portuguese American community had a big influence on me growing up.”

Mineola is a small town of 20,000 in Long Island, and it’s known for its high concentration of Portuguese people as well as Portuguese cafés, restaurants, clubs and associations. “A lot of the people in Mineola knew each other growing up in Portugal. [After moving here,] they stuck together to get by during hard times, and now, for the most part, they’re doing well. It’s an interesting story of literally the American dream in progress, and they share a special bond.”

Many of those people, like her family, come from a small farm town in Portugal called Alheira, where a small market doubles as the town’s post office, among other roles, and where mail is addressed to houses with no numbers, divided only by the area in which they sit. “It’s as if someone were to say they live in Times Square and everyone just  knows where the apartment is,” Diane muses.

As a child of immigrants, Diane has grown to appreciate the hardships of immigration and the beauty of the country she was born in. “I don’t think you really get an idea of how great this country is without talking to someone who’s had to fight to come here,” she said. Her parents are big fans of Portugal. But they’re also “big U.S. Patriots too.”

That, of course, didn’t keep her parents from laying on the pressure when she started hosting a FoxNews podcast called Food 101, which consists of short episodes aimed at introducing Americans to a variety of ethnic foods that they may have never heard of or tried before.

In a March 2010 episode entitled “From the Heart of Portugal,” Diane visits New York’s Aldea restaurant where she meets with chef George Mendes and samples cuisine such as camarão alhinho, bacalhau à brás and carne de porco à Alentejana. Like many Portuguese people, Diane finds Portuguese food difficult to define. “It’s a lot of pork, but it’s also a lot of seafood. It’s also a lot of chicken…really, nothing’s off the table,” she says.

Though it’s by no means her full-time gig, Food 101 gives Diane a nice opportunity to change up her routine, and living in Manhattan makes it easy to do it without a single international flight. “There are literally thousands and thousands of restaurants here,” she says. “It’s a rare thing when you can’t find a certain kind of food [in New York].”

Yet the series also takes her out of the city, bringing her around the map, including the interior of a submarine on a naval base in King’s Bay, Georgia. “It’s always a different experience meeting people from different walks of life,” Diane says. “I love to travel.”

When it comes to what she’s up to next, though, Diane still has yet to decide. “I’ve always ended up somewhere different from where I expected to,” she says. “People like to ask me what the ultimate goal is and I don’t have one, necessarily, but to continue more of what I’m doing and to continue to grow as a journalist. I love working in news and that’s always been the only ultimate goal. You literally learn something new every day.”

Diane’s commitment to working hard, being proactive and trying new things are what lead her. And with an open heart, she courageously follows her dreams.

(*)  Beth Santos is a third-generation Portuguese American and the Director of Programs at the National Organization of Portuguese Americans (NOPA). Beth graduated from Wellesley College with majors in Art History and Media Studies. She is also the founder and editor of Go Girl, an online magazine that features adventurous, independent women and their travels (travelgogirl.com). Originally from New Hampshire, Beth is a contributing writer for New Hampshire Magazine. She currently lives in Chicago. Learn more about Beth Santos here>>