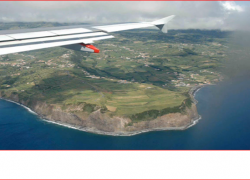 The Government of the Azores, in partnership with the Massachusetts Bristol County Sheriff’s Office, is organizing Thanksgiving celebrations to be held in Terceira (November 15) and São Miguel (November 18) dedicated to the deportees sent back to the islands from the United States.

The initiative was launched last year, through the efforts of Graça Castanho, Director of the Department for the Azorean Communities.

According to Castanho, the celebration was a request from the deportees themselves for whom Thanksgiving is a specially cherished holiday which reminds them of family and home in the United States.

Thomas M. Hodgson, Bristol County Sheriff, is in the Azores joining a team of volunteers to organize the celebrations.  Sheriff Hodgson is responsible for the Bristol County detention center that processes deportations to the Azores.

Donated turkeys together with traditional Thanksgiving dinner trimmings were shipped from the United States to the islands for the celebrations.

On November 15, 120 Thanksgiving dinners were served to deportees and their families in Centro Cultural de São Bento, Angra do Heroísmo, Terceira.

On November 18, 130 Thanksgiving dinners will be served to deportees and their families in Escola Roberto Ivens, in Ponta Delgada, São Miguel. Last year, 200 guests attended the celebrations.

On November 18, The US delegation is also sponsoring a meal to about 100 disadvantaged children on public assistance in partnership with local aid organizations.

Since 1989, over 1,200 Portuguese nationals were deported to the Azores  from the United States and Canada, most of them males. The majority were legal residents deported for minor misdemeanors. Deportees are Azorean-born children of legal immigrants from the Azores that were not naturalized American citizens at the time they broke the law.

Because current US deportation laws are disproportionately harsh and can be applied retroactively, many are being deported for minor misdemeanors which took place many years ago and for which they may have not served jail time. Once deported, individuals are banished for life from entering the United States.