Demystifying is Accurate; Living is not Accurate – Review 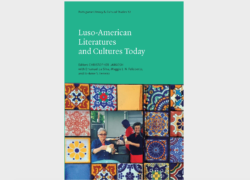 As Christopher Larkosh warns us in “Introduction: ‘Say It Right’: On Luso-American Literatures and Cultures Today,” the volume relies on a variety of theoretical and cultural approaches to explore the meaning of Luso-American and its respective ramifications. And it is, in fact, particularly interesting how the traditional conception of culture and Lusophony as concepts in and of themselves, is deconstructed throughout the essays included in the first section.

The figure of malassadeiras[1], who smile at us from the front cover, precedes an urgent, inclusive, and rigorous space for debate, in which not only the glory of the male figure of the Portuguese colonizer is questioned (“why do they still matter to us so much?,” p. 17). But, in addition, the fluidity, continuous transformation, and uncertainty of inherited, or otherwise essentialized identities which are often associated with the second or third generation of an immigrant community (Baden apud Villar, p. 29), are also established through one or more collectively built discourses (cf. Daniel Silva, “Trans-Atlantical Imbalances: Indexicality, Translingual Signs, and Power in the Portuguese ‘Global Nation’”).

The author Katherine Vaz is centered in the article “Voicing the Community, or a Voice for the Community: Katherine Vaz, the Portuguese American Writer” by Carmen Ramos Villa, and the interview made by Maggie L. N. Felisberto. Authors like Vaz expand, from the same transformative vision, the meaning of well-known verses, “To navigate is necessary/ To live is not necessary” (Navegar é preciso/ Viver não é preciso), which are both frequently and erroneously attributed to Fernando Pessoa[2]. In other words: navigating between two constellations and wanting, even so, to universalize what is particular to each one of them.

The process of thinking and rethinking identity, which unfolds in various post-colonial processes, from linguistic to the musical spheres, is included also in this volume. The discussion starts with an analysis of the Cape Verdean community’s affective relationship to Angola, or “Angolamania”. Then, it moves to an exploration of the communities formed by descendants of Sephardic Jews, who were forcibly converted and expelled from and in the Iberian Peninsula in 1492 and 1497. The volume then veers to discuss how the two Portuguese-speaking communities are related and continue to exist, despite the enduring struggle posed by the consequences of exclusion, expulsion, and conversion or Portuguese colonialism, within the context of North American culture. The articles exploring such realities, respectively, “Angolamania: Affective Bonds with Angola in the Music of the Cabo Verdean Diaspora” by Benjamin Legg, and “Judeotropicalism: Jewish Transculturations in the Lusophone New World” by Bonnie S. Wasserman, are, in fact, preceded by paragraphs that call into question the validity of the euphoria with which we tend to approach concepts or manifestations such as saudade and fado (Villar, pp. 39-40).

At the same time, the Catholic roots of certain cultural activities and linguistic characteristics of Portuguese immigrant communities also seem to both endure and transform through contact with the Francophile or Anglophone society, in spaces like Montreal. On this subject, Fabio Scetti (“Being Portuguese in Montreal: Cultural and Traditional Practices as Markers of the Community’s Identity”) notes the profound importance of ethnographic research as a resource necessary to better understand religiosity, the relationship with language (“My home is my language”, p. 91) or multiple identities in these communities. He adds: “it is possible to be Portuguese, Luso-Canadian or Luso-Quebecker or simply to be Canadian or Quebecker ” (p. 90). Furthermore, it makes perfect sense to read Scetti’s article followed by Angela Ferreira’s confessional short story (“An Imagined Encounter”).

It is also interesting to note how in the interview conducted by Christopher Larkosh, Jarita Davis reminds us of the present day, atrocious efficacy of colonial and racist structures (“whatever I do never seems to be enough”, p. 145). In addition, that conversation dovetails perfectly into the central theme of the forum of this volume, which stemmed of an initiative led by the Center for Portuguese Studies and Culture at the University of Massachusetts — Dartmouth, and which includes texts by Damares Barbosa, Patricia Schor, Mamadou Ba, and Selina Makana.

In the last text included in this volume, “Kale Soup and the Portuguese-American Soul: The Work of Millicent Borges Accardi”, Maggie L. N. Felisberto makes a particularly evocative and attention grabbing statement: “to be somber is […] something that comes naturally to the Portuguese” (p. 216). I take this somber remark as my point of departure – without, admittedly, ceasing to feel suspicious about its certainty and forcefulness –, to read the four poems included in this volume and authored by the talented Millicent Borges Accardi, to which a set of poems by Bobby Martinez and Irene Marques should be added. Excerpted below are some examples of verses whose grave tone strike a particularly “Portuguese” tone.

they long to don sadness,

it is a uniform, encompassing wool, knitted

halfway between loss and joy.

and we all stand in the presence

of this glowing map of your broken heart

wrecked on God’s reef of a world you held sacred.

I told myself this promise

Bred on the other side of the Atlantic, with lush, emotional, visceral [sentences

This somber tenor can perhaps help set the transition to the distressing irony of António Ladeira’s restless short story, “The teacher.” In it, Ladeira reflects on the act of writing from the point of view of someone who was once a writer, but who was ultimately not keen on it: “The teacher said that he had already been a writer and that he didn’t like it ” (p. 170).

Last but not least, taking into account how the latest political and social events threaten, on a global scale, the freedom of many minorities through the perpetuity of colonial modes of through, this volume seems not only urgent, but also crucial and critical too. It provides much needed respite, but also a necessary space for reflection and freedom.

[1] The photography “As malassadeiras” by Christopher Larkosh illustrates the cover of this  volume.

[2] This sentence is originally attributed to general Gnaeus Pompeius Magnus (106-48 BCE) and it became popular through Plutarch’s Life of Pompeius.