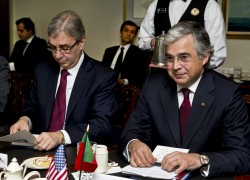 The meeting centered on the strategic partnership between Portugal and the United States in the area of defense and on the upcoming NATO summit scheduled for next May in Chicago.

Leon Panetta and Aguia-Branco addressed the Cooperation and Defense Agreement, under review, between Portugal and the United States. The agreement, which dates from 1995, charters the use of the US Lajes Military Base on Terceira island, in the Azores.

Stressing that Portugal has an indispensible role as a strategic ally of the United States, Leon Panetta informed Aguiar Branco that the United States are considering downsizing the American presence at Lajes and that the process will be negotiated bilateraly. The secretary said the United States will consult with Portugal on the modalities of the continued U.S. force posture at Lajes

In November of last year, US Secretary of the Navy Ray Mabus had said that, although no final decision had been made, the US was considering desactivating Lajes Air Base.

Activated in 1943, the Lajes Air Base, located on the northeast tip of Terceira Island, is home to the 65th Air Base Wing and U.S. Forces Azores. It provides logistics support for more than 3,000 aircraft, including fighters from the United States and 20 allied nations.

The visit included stops at the Tomb of the Unknown Soldier  at Arlington National Cemetery and at the National 9/11 Pentagon Memorial. In the afternoon José Pedro Aguiar-Branco was scheduled to meet with US lawmakers at Capitol Hill.