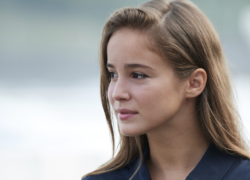 Portuguese born, Alba Baptista, has just debuted her acting career in the United States with a role in Warrior Nun, a web series on Netflix premiered on July 2.

For Warrior Nun, the Portuguese actress plays Ava, a 19-year-old who wakes up in a morgue and finds out that she is part of an ancient order who fight demons.

Her Netflix role is loosely based on a comics book series focusing on a nun named Sister Shannon, who finds herself with a group of nuns that fight against the forces of evil.

Born in Lisbon, on July 10, 1997, Baptista has been acting professionally for almost a decade. Warrior Nun is her first English speaking role, not a language barrier for her who is fluent in five languages.

Before landing the role in Warrior Nun, Alba Baptista was best-known for her work in Portuguese telenovelas, starring in Jardins Proibidos, A Impostora, Filha da Lei, A Criação, and Jogo Duplo. She has also appeared in a number of Portuguese movies that include Miami, Caminhos Magnétykos, Equinócio, Fatima and Patrick.

She has won the Best Actress Award, at the Festival Ibérico de Ciné, for her performance in Miami.

Her most recent film role was in Patrick, directed by Gonçalo Waddington, which was in competition at San Sebastiáan International Film Festival where it premiered in 2019.

Alba Baptista can be followed @alba.baptista on Instagram, where she has shared behind-the-scenes photos and videos from her time shooting the first season of Warrior Nun.