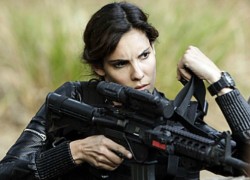 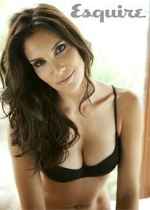 Portuguese American actress, Daniela Ruah, 28, was photographed and interviewed for the September edition of Esquire magazine.

She speaks about being born in the United States and raised in Portugal, about growing up skinny and hating it, on how she became an actress, that she enjoys being sexy and of “things that sound better in Portuguese.”

Daniela was born in Boston, in 1983, the only child of Portuguese-Jewish parents. She returned to Portugal with her family when she was five years old. In Portugal, she began working on “telenovelas” (soap operas) 11 years later when she was only sixteen. Currently in the United States she is a star of NCIS: Los Angeles and will soon appear in the upcoming movie Red Tails.

On growing up in Portugal and why she doesn’t have an accent, she told Esquire, ”I was born here in the States. I moved to Portugal when I was five. And then my parents put me in an English school. There’s this accent that I think everybody has when they grow up going to an international school. It’s a mix of not quite English, not quite American. When I moved to L. A., it just went completely American.”

About growing up skinny, she said, “I was so damn skinny at that point in my life. It wasn’t on purpose — it was just the way I was and I hated it … I was always such a skinny kid, so I kind of grew up with an ‘I hate skinny’ mentality.” 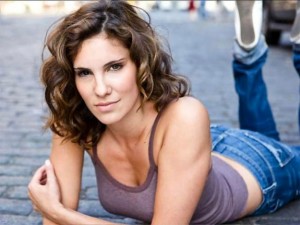 Commenting on the birthmark on her right eye, which gives her a unique alluring look, she explained, “It’s a birthmark called nevus of Ota. It covers the whole white of my eye and darkens it,” and she added, “The square of the eye, the white part, is completely dark on my right eye, not just the iris. It’s very common in Asian people but quite rare in Caucasians. It doesn’t affect my vision.”

About Portugal today and of her love for the country, she said, “The country is not doing well economically. People are upset and angry. You can feel it on the street. You can tell in the way they drive. We’re talking about one of the richest histories. We had an unbelievable empire, and so many maritime discoveries, and how is it that we are now reduced to this? But I still love the country.”

She also told Esquire that she was having fun posing for the magazine and that she enjoyed playing sexy. She said, “I’m actually expecting to have a lot of fun and to take a few more risks than usual. There are a few limitations, though. We’re not doing anything where you can see through the clothing. I’m generally very reserved with this stuff, but you know what, I’m a woman and I enjoy feeling sexy once in a while and why not have a little fun?”

About “Things that sound better in Portuguese”