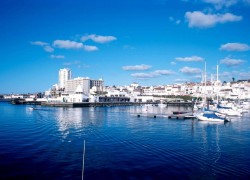 Food cooked in a volcanic geyser, fish from the deep Atlantic and sweet bread, these are just a few of the delights that award-winning chef Ming Tsai explores during a trip overseas to the Azores, part of the special programming events planned to help celebrate the television milestone of his 10th Anniversary Season.  Affiliated with the WGBH broacastpublic  television staion, a presentation of the project will take place in January 17, at Chef Ming Tsai’s Blue Ginger Resturant, in Boston, MA.

In the new season, Ming brings viewers “On the Road” for five episodes to experience the fun and zesty cuisine of the Azores, nine European islands 1,000 miles west of Lisbon, Portugal, 2,000 miles from Boston. SATA Airline supported the trip.

The five international shows in the Azores cap off a 10th Anniversary Season full of special events in 26 all-new episodes. The new season coincides with the October 2012 release of Simply Ming in Your Kitchen, a revolutionary, interactive new book of 80 recipes (published by Kyle Books).

On the trip, Ming learns about cuisine unique to these islands by cooking up dishes with local chefs, home cooks and culinary stars.

The Azores are home to a wide variety of culinary influences, and Ming travels from island to island uncovering each location’s unique cuisine – from Portuguese inspired stews to local fish and clams only found in the waters off the Azores.

“From winemaking to wood ovens to cooking underground in volcanic geysers, the Azores are inspiring islands rich in culinary treasures,” said Ming. “Exploring both the traditional and modern-day cuisine of this very special place that abounds in fresh seafood and pineapples is one of the biggest highlights of the entire series.”

On the Road in the Azores: Cozido
In this episode, Simply Ming is on the road traveling to the exotic Azores to learn how to make one of the region’s most famous dishes – Cozido – a one-pot meal that’s literally cooked underground by the Earth’s volcanic heat. Rising to the challenge, Ming and his guest chef, Pedro Oliveira, shop a local market for inspiration and then head to the village of Furnas on São Miguel Island where they will prepare their own versions of this delicious underground delight!

On the Road in the Azores: Modern Azorean Cuisine
Steeped in tradition, the islands that make up the Azores are rich with culinary treasures that will be shared as Simply Ming goes “on the road.” On this episode Ming and his guest chef, Hugo Ferreira, find inspiration shopping in a local market on the island of São Miguel for fresh ingredients. Together the two cook on the fly using their market finds and some other surprise proteins and vegetables to come up with dishes that reflect Azorean culinary traditions but with a modern day twist.

On the Road in the Azores: Alcatra
Ming heads for the islands on this very special episode of Simply Ming. Traveling to the Azorean island of Terceira, Ming cooks with local chef Mr. Eduardo Reis and learns the history of the very popular dish called Alcatra – beef stew – which is baked in a traditional Azorean wood oven. Together they find inspiration at a local modern market to put a contemporary spin on this ancient dish that was inspired by Portuguese explorers in the 15th century.

On the Road in The Azores: Fish Broth
In this episode, Chef Ming travels to the stunning Azorean island of Pico, where he meets up with a native chef to greet the fishing boats. Inspired by the bounty of seafood, Ming puts his own spin on fish broth, a local culinary favorite.

On the Road in The Azores: Wine & Petiscos
In Pico, an expert on Azorean wines shows Ming the rich heritage of winemaking on the island. Stomping grapes, tasting wine, and cooking up some petiscos (the Azorean tradition of small plate dining) will all be on the menu for Ming on this episode.

SATA Airlines has provided air service since 1947 linking the nine islands of the Azores with the world. That service expanded all the way to the United States in 1986. Each year, thousand of American tourists discover the Azores through SATA. Today, SATA offers widebody flights, on a fleet of Airbus A310s, year-round to the Azores from Boston and Toronto, with connecting flights to Lisbon and Madeira. And, through interline agreements with US Airways and Virgin America, SATA connects dozens of cites to the Azores now as well.  Read more >>