Crisis: The woman at the center of the storm – Portugal

No sooner had she been appointed minister of finance than the most senior woman in the Portuguese cabinet found herself at the heart of a political eruption that threatened to bring down the government and derail the bailout recovery process.

Less than 24 hours after the surprise resignation of Minister of Finance Vitor Gaspar, the foreign minister and leader of the junior party in the governing coalition, Paulo Portas, announced he was resigning too.  Real fears of a dramatic government collapse threw European financial markets into turmoil.

Gaspar had had enough of the persistent opposition to his efforts to get the country out of its financial and economic mess.

The reported pretext for Portas quitting was the appointment of Treasury Secretary Maria Luis Albuquerque as Gaspar’s successor. 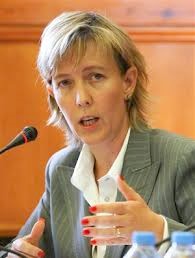 So who is this previously little-known woman, pictured right, who suddenly found herself in such a pivotal role in the country’s future?

First of all, she is one of a substantial gender minority in the Portuguese parliament. Two years ago, MPs elected Assunção Esteves as the first-ever female Speaker in a parliament in which men outnumbered woman 168 to 62.

Born in Braga in 1967, Albuquerque spent six of her school years in Mozambique. After graduating in economics in Lisbon, she went on to specialize and gain a master’s degree in monetary and financial economics.

Having worked in both academia and in public service, in 2011 she became the first secretary of state at the Treasury. As such, she strongly supported the policies of Gaspar to meet the bailout targets. Prime Minister Pedro Passos Coelho deemed her to be the best person to continue at the helm of the government’s program to avoid bankruptcy.

While little known to the general public, Albuquerque, 46, is a familiar face to members of the ECB, EU and IMF ‘Troika’. The Financial Times quoted a senior EU official as saying: “She’s got a strong grasp of economic policy and has been a key figure as state secretary through tough times.” The official added that Gaspar’s tenure came “during the most challenging circumstances, which always consumes political capital.”

Whatever Portas’ objection to Albuquerque and the likelihood that she was intent on continuing severe and highly unpopular austerity measures, “a viable solution” seems to have been sorted. “A formula was found to maintain government stability,” Passos Coelho said on Thursday after a series of crisis meetings.

It had been a close call. The opposition had already proposed a general election to coincide with local voting scheduled for September 29. The prophets of doom were warning that on top of the troubles in Greece, Spain, Cyprus, Italy, Slovenia and Ireland, Portugal could be forced to ask for another bailout loan or even forced out of the Eurozone.

For Maria Luis Albuquerque, married to a journalist and with three children including twins, life at home may not be quite the same for the foreseeable future. With a summer of discontent looming across Europe, and temperatures in Portugal this weekend forecast to soar to more than 40° C (104° F), relaxing by the pool or sunbathing on the beach will probably not be an option.