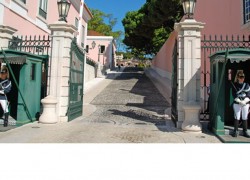 Portugal’s President Aníbal Cavaco Silva is holding two days of a new round of meetings, with representatives of the major parliamentary parties, to address the political crisis resulting from the resignation, last week,  of Minister of Finance Vitor Gaspar and Paulo Portas Minister of Foreign Affairs.

The deal was submitted to the President for his approval.  Portas, who is the head of the CDS-PP, the party in the coalition with the government of Prime Minister Passos Coelho, had said his decision to resign was irrevocable.

Portas abandoned his post following the resignation of Finance Minister Vitor Gaspar swiftly replaced by Maria Luís Albuquerque. Portas disagreed with the appointment of Albuquerque who, he believes, would continue Gaspar’s austerity measures he opposes.

On Sunday, the President of the Regional Government of the Azores, Vasco Cordeiro, pressed for early elections as the solution leadingto government stability and the rebuilding of trust between the government and the Portuguese people. Sworn president  in 2012, Cordeiro is the leader of the Socialist Party (PS) in the region.

Last week, the President had met briefly with António José Seguro, the leader of the opposition Socialist Party (PS). Following the meeting, Seguro told reporters he had asked the President to call early elections. He suggested that legislative elections could be scheduled for September 29.

Aníbal Cavaco Silva , was elected for a first term as president in 2006 and re-elected in 2011. Under the Portuguese constitution, although the post of the Portuguese president is largely ceremonial and the executive power lies with the prime-minister, the president can act to mediate in political crises and has the power to dissolve parliament and call for early elections.