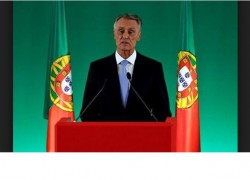 In an attempt to quell the current political crises, the President of Portugal Anibal Cavaco Silva is meeting today with the leader of the Socialist main opposition party, António José Seguro, and has summoned a meeting for Thursday with Prime Minister Passos Coelho and the leaders of the main political parties.

The political crisis has resulted from the abrupt resignations, early in the week, of the Minister of Finance Vitor Gaspar and the Minister of Foreign Affairs Paulo Portas. The crisis may force the President into dissolving parliament and calling for early elections.

Under the Portuguese constitution, although the post of the Portuguese president is largely ceremonial and the executive power lies with the prime-minister, the President can act to mediate in political crises and has the power to dissolve parliament and call for early elections.

Portas, who is the head of the CDS-PP, the party in the coalition with the government, has said his decision to resign was irrevocable.

The center-right government  of Passos Coelho (PSD) came to power in early elections June 2011, after the policies of the former Socialist government had failed and a bailout of 78 billion euros was requested from the IMF and EU to fund the national debt.

Aníbal Cavaco Silva , 75, was elected for a first term as president in 2006 and re-elected in 2011. He was prime-minister from 1985 to 1995. He is the only Portuguese political leader to achieve two consecutive absolute majorities.