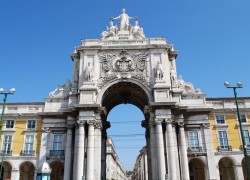 Portuguese authorities said Thursday, September 3, that Portugal is ready to welcome more than the proposed 1,500 asylum seekers fleeing war conflict in the Middle East and Northern and Central Africa.

In a press conference, Portuguese Minister for Regional Development Miguel Poiares Maduro said that “Portugal will participate in the effort, and we are ready to take in a greater number” of people. “We hope that other European countries will also show solidarity,” Maduro said.

According to Portuguese Minister for Foreign Affairs, Rui Machete, the 1,500 figure was “provisional” and “If certain countries refuse to show solidarity, we will have to resolve the problem,” he added. However, Machete also said that although Portugal “is ready to make sacrifices the country is concerned with “jeopardizing its economic recovery.”

In May, when the number of asylum seekers in Europe increased, the European Commission had suggested that Portugal receive an estimated 2,400 refugees. In response to the appeal, Portugal said it would take between 1,400 and 1,500 refugees.  Portugal gave asylum to just 40 refugees last year out of 155 asylum seekers. The total population of Portugal is estimated at 10,560,000 (2011).

According to media reports, the Portuguese Red Cross has revealed it is planning to set up a refugee camp in the southern region of Algarve and, according to the Portuguese Council for Refugees (CPR), many Portuguese families have also showed willingness to receive refugee families in their homes. A number of Portuguese enterprises and private institutions have also offered their support.

The former Portuguese Prime Minister António Guterres, current United Nations High Commissioner for Refugees, told CNN that the refugee crisis requires a coherent response. “No country by itself can do it,” he said. “These people are forced to go by boat, they pay four or five thousand Euros and they die in these desperate circumstances,” Guterres said.