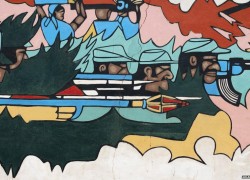 Mozambique is facing its worst conflict since 1992, when the Rome peace accords brought an end to 16 years of civil war between Renamo and Frelimo, the country’s main opposing political factions.  A former Portuguese colony in East Africa, Mozambique became independent in 1975.

Reports are still confusing and contradictory, but the political and military tension has worsened since early this week with gun battles between Renamo rebels and government forces, particularly in the Inhambane province is southern Mozambique, home to most of the country’s tourism industry.

Frelimo, the governing force, has increased military action against Renamo guerrillas accused of wanting “to cut the country in half at the river Save.”  According to Filipe Nyusi, Mozambique’s Ministry of Defence, Renamo has been recruiting youths to “put the plan into operation.”

“From their (Renamo’s) political discussion, since before the current situation (armed conflicts) the objective has been to divide the country at the river Save. Well placed voices in Renamo have come out in public with their intentions to put up barriers on the bridge over the river,” said Colonel Artur Chume.

Rahil Khan, political advisor to Renamo has said that the armed movement had never completely got rid of the weapons it used in the 1976 to 1992 civil war. “Our fighters have weapons all over the country”, he said, adding that the General Peace Agreement that was signed in 1992 allowed the guerrilla fighters to keep their arms.

The ongoing political and military crisis in Mozambique has prompted thousands of people in the centre and south of the country to flee their homes, with almost 4,000 already living in temporary camps, according to local officials.

At the district capital of Gorongosa, in Sofala province, central Mozambique, the local authorities estimate that at least 3,845 people are in camps, having fled Vunduzi and Canda because of frequent clashes between government forces and armed men from Renamo. National relief agencies are distributing food to the refugees, and are poised to start handing out tents, according to local media.

In the south of the country, in Inhambane province, several dozen people have taken refuge in the town of Homoíne after fleeing clashes that began in Pembe on Tuesday between Renamo and the defence and security forces. No official figures are yet available.

A new Frelimo’s candidate for President of Mozambique will be chosen at a Central Committee meeting scheduled between February 27 and March 2, 2014. The national election will be held on October 15.