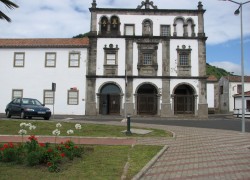 The life and scientific work of Portuguese American Nobel Prize Winner’06, Craig Mello, is the topic of an itinerant exhibit now taking place, from May 3 to June 3, at the Museum of Flores in the town of Santa Cruz, Flores island.

The exhibit “Craig C. Mello, Nobel Prize for Medicine,” aims at encouraging young students to pursue scientific studies and at providing a retrospective of Craig Mello’s visit to the Azores in 2009.

Since November 20, 2009,that  the exhibit is being displayed on every island in the Azores so that the Azorean people may become acquainted with the Portuguese American 2006 Nobel Prize Winner.

The American born 2006 Nobel Prize Winner has roots in Ribeira Grande, São Miguel  island, the homeland of his great-grandfather. He is a biologist and a professor of Molecular Medicine at the University of Massachusetts Medical School, in Worcester (MA).

Craig Mello was a recipient of many awards and honors when awarded de 2006 Nobel Prize with Andrew Z. Fire for the discovery of RNA interference.