Craig Mello: Doctor Honoris Causa by the University of the Azores – Ponta Delgada 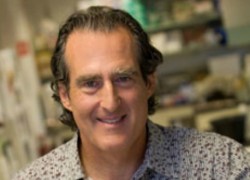 Portuguese American researcher Craig Mello, winner of the 2006 Nobel Prize in Medicine, will be awarded a Doctor Honoris Causa  honorary degree, in Biochemistry and Biology, by the University of the Azores in a ceremony to be held January 26.

Born in New Haven, Connecticut, Craig Mello, is a biologist and a professor of Molecular Medicine at the University of Massachusetts Medical School, in Worcester (MA).

Craig Mello, 52, who has roots in the Maia town of São Miguel island, the homeland of his great-grandfather, has visited the Azores several times. Mello bequeathed his Nobel Prize medal and diploma to the archipelago to “inspire young Azoreans to study science.”

With biologist Andrew Fire, Craig Mello’s research has helped to establish that certain RNA molecules play a far more impressive role in the cell. In a groundbreaking discovery, he found that short snippets of RNA can silence the expression of targeted genes.

This phenomenon, called RNA interference, not only has become an indispensable means for studying gene function but has been found to be a normal part of gene regulation during embryonic development and may play a role in cancer and other diseases.

He is also a co-founder and the scientific advisory board member of RXi Pharmaceuticals biopharmaceutical company.

Craig Mello was a recipient of many awards and honors when awarded de 2006 Nobel Prize for Medicine for the discovery of RNA interference.