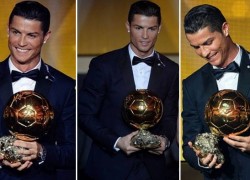 Cristiano Ronaldo has won the 2014 FIFA Ballon d’Or, an award that honors the player with the best performance of the year. The Portuguese footballer plays forward for Spanish Real Madrid.

One of soccer’s all-time greatest players, Ronaldo won this year for the second time in a raw, after having won the honor in 2013. He received the honor for the first time in 2008. He also won the 2013–14 UEFA Best Player in Europe Award and is the second player to win three European Golden Shoe awards.

“I would like to continue the work that I have done so far. I want to try to improve, to become better as each day goes by. I never thought that I would bring this trophy back home on three occasions. I want to become one of the greatest players of all time,” said Ronaldo in his acceptance speech.

Ronaldo, who led the Real Madrid to its record 10th European title in 2014, received 37.66 percent of votes of national team coaches and captains and selected media. Ronaldo scored 61 goals last year for club and country, and set a Champions League season record with 17 goals.

Messi, the Argentine star forward rival on Barcelona, was second in voting with 15.76 percent, just ahead of goalkeeper Manuel Neuer (15.72), who helped Germany to the World Cup title. Messi won the award four straight times from 2009-12.

“This prize is the recognition of his exceptional sport level, the determination and dedication he has showed throughout his career as a footballer […] Contributing to the enhancement of sport in Portugal and to the international projection of our country, this important trophy adds to the extend and relevant number of awards he has received as a footballer, both at home and abroad,” stated Portugal’s President, Aníbal Cavaco Silva, on the official website of the Presidency.