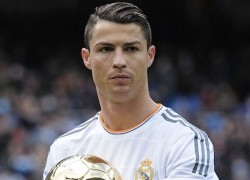 At the event, FPF honored the most outstanding personalities of the Portuguese football history including Chelsea manager Jose Mourinho was named as the ‘Portuguese Coach’ of the century during the ceremony.

The candidates for the ‘Best Player’ award were Cristiano Ronaldo, Benfica’s legend Eusébio and former Real Madrid midfielder Luis Figo. Ronaldo managed to beat both Figo and Eusébio, considered to be the two greatest Portuguese footballers of all time.

Both FIFA’s president, Joseph Blatter, and UEFA’s president Michel Blatter were present at the ceremony to witness the announcement. The winner was decided by fans who voted online through the FPF’s official website.

Cristiano Ronaldo, who plays forward for Spanish team Real Madrid, couldn’t attend the ceremony because of the Copa del Rey match against Atlético, scheduled for January 15.

On Monday, January 12, Cristiano Ronaldo won the 2014 FIFA Ballon d’Or, an award that honors the player with the best performance of the year. He won the distinction for the second time in a raw, after having won the honor in 2013. He received the honor for the first time in 2008.