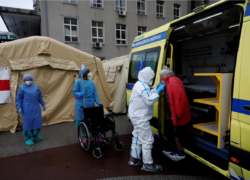 Portugal mainland has recorded the highest daily increase in COVID’19 infections, in the past four months, according to the epidemiological bulletin of the Directorate-General for Health (DGS) released on Wednesday.

Daily cases have increased gradually over the last two weeks.

New data shows the number of cases has more than doubled, from 249 of the previous day, hitting the highest since April 20 when 657 new infections were reported.

Accordingly, Portugal reported 646 new Covid-19 cases on Wednesday, more than double the average daily case count for August, according to data from the country’s Ministry of Health.

The majority of new coronavirus cases were registered in the greater Lisbon area, Porto urban area in the northern region, and the southern region of Algarve.

Prime Minister António Costa said on Wednesday that a repeat of a nationwide confinement “is not a scenario” because the country could not support it. He asked the Portuguese to be “extremely disciplined” respecting the pandemic prevention protocols.

“The best way not to stop again is to be extremely disciplined and play by the rules. We must keep this pandemic under control and that requires enormous discipline on the part of all of us,” António Costa stressed.

Since the beginning of the COVID’19 pandemic, Portugal has recorded 1,849 deaths and 61,541 infections.

In Madeira and the Azores COVID’19 cases are far lower than those on mainland Portugal.

In the last 24 hours, five cases of COVID-19 were diagnosed, in the Azores, four on São Miguel and one on Graciosa.

So far, 249 cases of infection have been detected in the Region, with 42 active currently, of which 34 on São Miguel, six on Terceira , one on Pico and one on Graciosa islands. A total of 16 deaths were reported since the pandemic outbreak.

Madeira recorded 3 new cases of COVID’19, in the last 24 hours, with 44 patients positive, making a cumulative total of 177 infected. No deaths have been reported since the pandemic outbreak.

The COVID’19 pandemic has killed more than 900,000 people worldwide.