COVID’19: Infections are rising on the mainland and the islands – Portugal 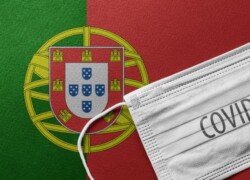 Portugal’s coronavirus cases have passed the 100,000 last week, with an average of over 2,000 new infections a day, the highest since the pandemic started.

Most of the new cases are concentrated in the northern region and in and around Lisbon the capital.

Authorities have stressed that the country’s economy will not shut down again, as happened during a six-week lockdown in March.

To slow the spread, new rules are being enforced which include increasing in testing and tougher preventive measures.

On Friday, Parliament voted on a proposal to make masks compulsory in outdoor spaces. The measure, valid for at least 70 days, orders residents aged 10 or over to wear masks outside whenever physical distancing cannot be kept.

Public gatherings are now limited to only five people. Since the fast spread of the virus has been blamed mostly on family gatherings, family celebrations such as weddings can be attended by a maximum of 50, while public parties were banned.

The government has also banned people from non-essential domestic travelling, between October 31 and November 2.

The Azores today recorded 2 additional positive cases of COVID’19 on São Miguel Island. The region currently has 68 active positive cases. So far, 369 cases of coronavirus infection have been detected in the Region, according to the Regional Health Authority.

Portugal, which has one of the world’s highest testing rates, expects cases to keep climbing, said Health Minister Marta Temido, following a warning by the World Health Organization.

The Portuguese government re-imposed a “state of calamity” in the face of mounting COVID-19 cases. A lockdown was lifted gradually from May 2 after the country shut most non-essential services. The country declared a state of emergency on March 18.