COVID’19: Health system in despair on the verge of collapsing – Portugal 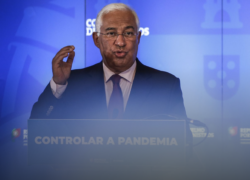 Portugal is registering the world’s highest COVID’19 infections and death rates due to the faster-spreading of a more contagious variant form of the virus first detected in Britain.

The country has now the highest seven-day average rate in the world of new cases per 100,000 population and the second-highest rate of new deaths after the United Kingdom, according to data by Johns Hopkins University.

Portugal also has the highest number of coronavirus cases in Europe per capita over the last seven days, according to a tracking website supported by Oxford University.

Prime Minister António Costa told the press Thursday that, “The risk of this virus spreading through society has increased,” adding, “We have seen that, in the space of a week, the variant has spread significantly,” and that “The spread has jumped from 8% last week to 20% this week and may reach 60% in coming weeks,” he said.

Portugal’s public health system is on the verge of collapsing as hospitals in areas hit by a coronavirus surge are quickly running out of intensive care beds to treat patients.

“Our health system is under a situation of extreme pressure,” Health Minister Marta Temido told reporters. “The gravity of the situation is clear for everyone to see,” she said, and that “There is a limit, and we are very close to it.”

“We are already treating patients beyond our installed capacity,” said Daniel Ferro, director of Lisbon’s biggest hospital Santa Maria. “And we are not the only hospital where this is happening.”

Deaths have reached a record of over 200 a day, bringing the total toll to 9,686, at 1,044 per million inhabitants, the highest average in the world.

A country of about 10.3 million, with 581,605 confirmed cases, and 9,465 confirmed deaths, new daily COVID-19 cases jumped to more than 14,600, setting a new record on Wednesday, as the country became one of the worst pandemic surges in the world.

Deaths will continue to increase into February, with the number of new cases rising into the 16,000s, even 17,000s.

The number of COVID’19 patients in hospital and in intensive care also rose to new record highs, with 5,493 and 681, respectively as cases continue to climb sharply. Patients needing hospitalization will increase dramatically over the next week, according to the Portuguese Association of Hospital Administrators.

Doctors spoke on Thursday of exhaustion and despair. Ambulances have been lining up outside hospitals, waiting for beds to become available. A field hospital with 58 beds will be made available on the grounds of the Lisbon University campus.

Most new cases were concentrated in Lisbon, where many patients at the city’s public hospitals have already been transferred elsewhere, including to health units in the country’s second biggest city Porto.

The country has been in complete lockdown since last week, under which all non-essential services were shut down and people urged to stay at home.

“Faced with this new reality, a new set of measures is required,” Prime Minister António  Costa stressed Thursday saying that the government has a “civic duty” to reinforce Portugal’s lockdown declared last week.

Accordingly, in addition to the measures issued last week, the government now ordered all schools to close for next 15 days. Parents of schoolchildren, under the age of 12, will be compensated, receiving 66% of their pay from the government, for staying home and missing work. Courts will suspend non-urgent cases.

The Catholic Church is suspending all public masses effective Saturday, until further notice due to the “extreme seriousness” of the pandemic.

The Secretary of Health of the Azores, Clélio Meneses, said Thursday that the COVID’19 pandemic is “controlled” in the region.

“Contrary to what happens in the rest of Europe and in a very intense way in the Portuguese mainland, the situation in the Azores is perfectly controlled and stems from what have been the measures that the Regional Government has adopted, but above all from the behavior of the people,” said Clélio Meneses, at a press conference in Angra do Heroísmo, Terceira Island.

The Azores currently have 643 active cases of infection with the new coronavirus, of which 621 in São Miguel, 16 in Terceira, 4 in Flores, one in Faial and one in Pico.

The Azores currently has 24 people hospitalized with COVID’19-19 in the islands of São Miguel and Terceira, including 8 in intensive care units. The hospitalization capacity is not yet exhausted.

Since the beginning of the pandemic, 3,291 cases of infection with the new coronavirus have been detected in the Azores, with 23 deaths reported.

In the Madeira arquipelago 156 new cases of COVID’19 have been added to the 1.831 active cases, with 67 hospitalized and total of 31 deaths reported.