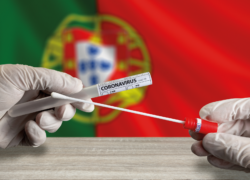 The Portuguese government has announced that the current “calamity situation,” will be extended until August 8, in response to a four-month high daily new COVID-19 cases and deaths.

The “calamity situation,” affective for mainland Portugal only, is the highest response to a national emergency.

According to data from the Directorate-General of Health (DGS), on Thursday 3,622 new COVID’19 infections were reported, the highest since early February, and 16 new deaths, raising the country’s respective totals to 943,244 and 17,248.

Most infections (1,606) are registered in the Lisbon and Tagus Valley, while 1,314 people are infected in the North of the country.

The 16 deaths in the last 24 hours were registered in the regions of Lisbon (nine), North (four) Algarve (two) and Centre (one).

In the Azores, 45 new cases were reported on Thursday. Since the begin of the pandemic the Azores accounted for a total of  6.499 COVID’19 cases, with 34 deaths reported.

In Madeira, 33 new cases were reported on Thursday. Since the beginning of the pandemic, Madeira accounted for a total of 10.051 COVID’19 cases, with 73 deaths reported.

The Delta variant of the virus is responsible for 94.8% of cases of infections, with 100% of the cases in the Alentejo, Azores and Madeira.

Not since 22 March, when there were also 16 deaths in the previous 24 hours, had the daily number of deaths been this high.

The highest response to disaster situations was enacted on May 1 under the Portuguese Civil Protection Law and has been renewed repeatedly since then.

According to Minister of the Presidency, Mariana Vieira da Silva, 47% of the population has been fully vaccinated. Since the start of the pandemic, 943,244 people have been diagnosed. The total resident population of Portugal is estimated at 10.290 milion.

In spite of the current crises, Prime Minister António Costa said on Tuesday that Portugal should reach group immunity by the end of the summer.

The Covid-19 pandemic has caused at least 4,128,543 deaths worldwide, among more than 191.9 million cases of infection by the new coronavirus, according to the most recent assessment by the Agence France-Presse.