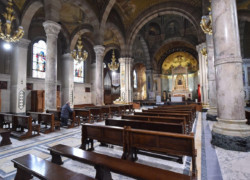 During Easter, people of faith will be among those supporting the COVID-19 emergency measures imposed by politicians on the advice of scientists.

All places of worship in Portugal will remain closed at least until April 17 – and longer should the present state of emergency be extended.

Catholics, by far the largest religious denomination in this country, are having to make do with services on television instead of attending Mass in their local churches. Pope Francis has said that the pandemic represents a chance for creativity and positive change and urged people to reconnect with the real world and reject what he called “throwaway culture.”

Jehovah’s Witnesses, well-known among all other religious and non-religious sections of the community for their door-to-door preaching visits, have suspended all such activity and are adhering to self-isolation and social distancing. They quote the Bible in saying that response to the pandemic should be measured and based on fact not fear.

Passover, which is being celebrated between April 8 and 16, will not be quite the same joyous occasion for Orthodox Jews this year because of the inability of extended families and friends to gather together.

In an especially stringent regulation, citizens have been banned from moving out of the municipal area in which they reside unless they have precise and important reasons for doing so.

All this is in contrast to the attitude of some preachers in the former Portuguese territory of Brazil who insist COVID-19 is divine punishment – the work of Satan – and that the virus is powerless against those who are not afraid of it.

Similarly, some evangelical pastors in the United States are urging congregations to mingle over Easter and ignore any lockdown rules.

American far-right evangelicals, who make up a substantial section of President Donald Trump’s supporters, are heavily into the blame game. They want China to be held accountable for allowing the virus to spread.

They believe the fundamental cause of this pandemic has been incompetence, corruption and malice on the part of the non-religious Chinese scientific and political establishment.

A reliable analysis of who has been responsible for the spread of the pandemic is probably still some time away, but it seems probably that Portugal, unlike the UK and the US, will be regarded as one of the countries that  took sufficient decisive action at the right time.

Meanwhile, the notion that COVID-19 is not what scientists and medical experts are making it out to be is rife on social media. Disinformation is adding to the fears among those who are accessing the Internet in far greater numbers than ever before.

Crazy conspiracy theories amounting to blatant false news are being circulated to the detriment especially of vulnerable people in self-isolation. This is being done despite the monitoring efforts of Facebook and other social networking platforms.

Certain elements within the mainstream media are far from innocent in adding confusion among viewers and readers. Some TV reporters have been blathering on and on and on about data revealing not only the number of COVID-19 deaths in various countries, but lots of other bewildering numbers and percentages. Least reported are statistics on those who have contracted coronavirus but survived it without hospitalisation or any significant problems.

The economics of this pandemic are something else, of course. The longer COVID-19 lasts, the greater the ordeal of mass unemployment and collapsing companies.

Greater clarity on the many coronavirus uncertainties that still exist today in Portugal will have to wait until after Easter.