Corvo: Home to the most unique flower in the world – Azores 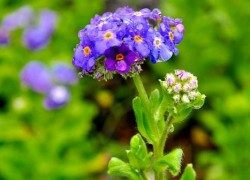 One of rarest flowers in the world, known as ‘Myosotis Azorica’, grows exclusively on the island of Corvo where it was found near extinction.

Endemic to the Azores, the plant was identified for the first time in 1842 by British botanist H.C. Watson, on the islands of S. Jorge, Pico, Faial, and Flores. Since 2012 the Myosotis Azorica was believed to be extinct in the archipelago.

Known locally as ‘Não-me-esqueças’ [Forget-me-not], the Myosotis Azorica is still extremely vulnerable to extinction due to its rarity and the presence of goats and sheep in its habitat.

SPEA, in collaboration with Corvo’s Natural Park and the Munich Technical University, are joining efforts to determine how to protect this most unique species. They hope to be able to increase the number of existing plants through nursery propagation.

Corvo (population 468) is the smallest and the northernmost island of the Azores archipelago. The island (5 km diameter/17.1 km2 area) emerged around 730,000 years ago of volcanic origin. The island is listed as a World Biosphere Reserve by UNESCO.