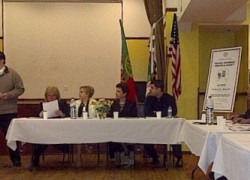 The Advisory Board for the Portuguese General Consulate in Newark, NJ, organized a forum on “Educação e Solidariedade” on March 19th at the Casa do Ribatejo in the city. Two panels discussed issues relating to the teaching of the Portuguese language in the community schools and social and economic support for the underprivileged in the Portuguese community.

Some community leaders expressed concerns regarding the financial strain on their organizations to pay for Portuguese language instructors due to a decrease in membership, resulting from a decline in immigration from Portugal. Speakers also addressed the economic hardship facing the Portuguese Community in the Unites States. The economic power of the Portuguese language in the North American job market and the importance of education for the empowerment of the community were also highlighted.

It was also emphasized that community organizations are not taking full advantage of local, state and federal opportunities. During the conference, different participants suggested solutions for the concerns expressed, making clear that the community has the answers to its own problems but needs to promote more forums to exchange meaningful information. In that regard, the Portuguese General Consul in Newark, Maria Amélia Paiva, announced that more of such forums will be offered and that the Consulate will find ways to keep relevant information easily accessible for everyone.