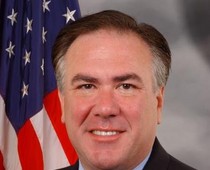 Congressman Dennis Cardoza (D-CA), Co-Chair of the Congressional Portuguese American Caucus, announced he will not seek re-relection in 2012.

Born in Merced, California, of Portuguese ancestry, the 52-year-old California’s 18th congressional district representative will step down at the end of 2012, ending a career that dates back to three decades ago representing the people of Central Valley, California.

“I love the people of the Central Valley, and thank them for the confidence they have placed in me,” Cardoza said in a statement. “While I plan to retire from public service after this term in Congress, I will energetically continue my efforts to improve California as a private citizen,” he stated.

In January 2011, working with the National Organization of Portuguese Americans (NOPA) Rep. Dennis Cardoza and Rep. Jim Costa led the process to reinstate the Congressional Portuguese American Caucus by agreeing to be co-chairs, moving it forward and making the Caucus official in May 2011.

Democrats enjoy a 48-to-33 percent voter registration advantage in the new district. Cardoza did not specify his career plans once he leaves the House of Representatives.