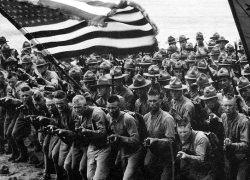 The Ferreira-Mendes Portuguese American Archives at the University of Massachusetts Dartmouth announces a presentation by Dr. Paula Noversa Rioux titled “Portuguese-Americans During the Great War.”

The talk, which is free and open to the public, will take place at 5:30 PM on Thursday, April 6th in the Prince Henry Society Reading Room of the Ferreira-Mendes Portuguese-American Archives, located on the mezzanine floor of the Claire T. Carney Library.

On April 6, 1917, the U.S. joined its allies—Britain, France and Russia—to fight in World War I. Many Americans were not in favor of the U.S. entering the war and wanted to remain neutral.  In this talk, scheduled to coincide with the entry of the U.S. into the Great War, Dr. Paula Noversa Rioux examines how Portuguese-Americans faced the call to arms and the significance of the event for their integration into U.S. society.

The Portuguese were part of the “First Wave” of southern and eastern European immigration to the United States, which took place roughly from 1870 to 1924. For most of these immigrants, the Great War brought with it unique opportunities and choices to test their sense of loyalty and belonging. For the Portuguese, there was the initial challenge of facing Portugal’s entry into the war a year before the United States. Should they return to join their Portuguese brothers, cousins and acquaintances in the fight? Then one year later, when the United States joined the fray, were they meant to “do their part” for the war effort, just like any other American?  In this presentation, Dr. Rioux argues that for many Portuguese immigrants, joining the war was a means to prove that they were truly American, willing to risk life and limb for their new country.

Dr. Paula Noversa Rioux is a lecturer at the University of Massachusetts Dartmouth. She earned her doctorate at the University of New Hampshire, Durham, where she was the Prince Henry the Navigator and Portuguese Discoveries Graduate Fellow and the Assistant Editor of the journal Portuguese Studies Review. Her dissertation, “Shifting Alliances and Fair-Weather Friends: Portuguese-American Relations, 1941-1951,” focused on Portugal-US relations during a critical period of international restructuring during and after World War II. Most recently, she was the lead researcher for the exhibit, “The Lure of the Spindle: Early 20tth Century Portuguese Immigration to Lowell,” which opened on 6 August 2015 at the Boott Mills National Park in Lowell Massachusetts.

The entrance to the Ferreira-Mendes Portuguese-American Archives is located on the campus side of the Claire T. Carney Library. For further information, contact 508-999-8684 or email spacheco@umassd.edu.