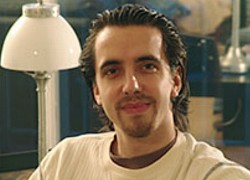 The organization of the 7th International Film Music Festival City of Ubeda, Spain, has announced that Portuguese composer Nuno Malo is one of the six nominees for the 2010 Gold Spirits Award, for Best Revelation Composer, for the film score “Amália.”

The winner will be announced during the Gold Spirits Awards Gala, to be held July 18-24, 2011.

A Portuguese native of Madeira Island, Nuno Malo holds a Bachelor’s and Master’s degrees in composition from the London College of Music in England. He later completed his post-grad in Music for Film and TV at the University of Southern California in Los Angeles.

He made his film music debut in 2003, and scored his first English language film, The Celestine Prophecy, in 2006. His scores for “Amália” and the 2007 courtroom thriller “Julgamento” have both been released on CD by MovieScore Media.

Most recently, February 2011, Nuno Malo has received the Breakthrough Composer of the Year Award for the film score “Amália” by the International Film Music Critics Association (IFMCA). The annual IFMCA Awards, which were first presented in 2004, are the only awards given to composers by film music journalists.

In addition to his film credits, Nuno has been awarded with many prestigious international awards and accolades including a BMI Film Music Award/Scholarship (at USC), Los Angeles, USA, The Malcolm Arnold Prize, London, UK, The Worshipful Company of Musicians Silver Medal, London, UK, The Henry Purcell Composition Prize, London, UK and the Camões Song Competition, Portugal.

The Gold Spirit Awards were established in 2001 by the BSOSpirit Internet site dedicated to soundtracks and film music fans.