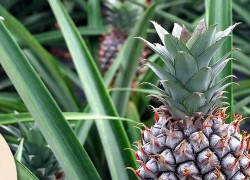 The International Azorean Pineapple Festival, sponsored by the AEHT (European Association of Hotel and Tourism Schools), will be held in Ponta Delgada, São Miguel, Azores, from April 25-29.

The objective is to share the culture of the Azorean pineapple as a unique gourmet product and to challenge the participants to use this fruit in preparation of dishes and drinks.

Students from 14 international European culinary schools will prepare a menu and cocktails in which the Azorean pineapple is the main ingredient. Bar, table service and a culinary art contests will be carried out with a jury supervision and judgement.

Competitions will be organized in three categories: Cooking, Restaurant-Service, and Bar. Prizes will be given for the following categories: Best Bartender; Best Table Service; Best Young Chef; Creativity and Innovation and Best Team.

Original from South America, pineapples were introduced in the Azores in the 19th century. They were brought to the islands from Brazil by Portuguese sailors as an ornamental plant.

In the Azores, pineapples are only cultivated on the island of São Miguel, outside the town of Ponta Delgada, in the small town of Faja de Baixo, where they are grown inside about 6,000 glass steaming hothouses, on soil made of organic matter, with about 1000 plants in each greenhouse.

Members of the family of tropical plants called the “bromeliads”, the Azorean pineapples are the only pineapple plantations in Europe. Very labor intensive, it takes two years to grow a single fruit. In the greenhouses, the different growth phases can be seen.

Azorean pineapples are distinctive. They offer the perfect contrast of sweet and sour and contain an enzyme that is used to aid digestion and to tenderize meat.

Given its distinctive quality as well as its high gastronomic, cultural and landscape value, the “Azores Pineapple” trademark, with acknowledged Protected Designation of Origin (PDO), is a product strongly associated with the image of the Region with significant economic and historical significance.

The AEHT is an International Non-Governmental Organisation (NGO) enjoying consultative status with the Council of Europe. Its prime objective of the association is to promote a European outlook among Hotel and Tourism Schools. At the time of its foundation in 1988 the AEHT consisted of 24 schools from 16 European countries. Over the years it has grown considerably, and now has a membership of around 430, with an AEHT national representative in 44 European countries.