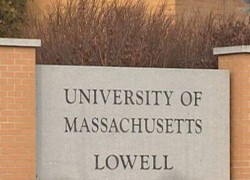 The Saab-Pedroso Center for Portuguese Culture and Research at the University of Massachusetts Lowell, in partnership with the Luso-American Foundation of Lisbon (Portugal) and the American Foundation/UMass Lowell College of Fine Arts, Humanities, announced the creation of the ‘Social Sciences Visiting Professor in Portuguese Studies Program,’ underwritten in part by community based philanthropists Elisia Saab and Luis Pedroso.

The Visiting Professor in Portuguese Studies Program will bring Portuguese scholars to UMass Lowell over the next three academic years. The Visiting Professor will teach in the areas of history and the social sciences and support the development of a minor and a major in Portuguese Studies. The program launches in the Spring Semester 2015 with Dr. Ana Valdez, postdoctoral fellow in History at Yale University and researcher at the Centre for History at the University of Lisbon.

Prof. Valdez, author of Historical Interpretations of the “Fifth Empire”: The Dynamics of Periodization from Daniel to António Vieira, SJ (Brill, 2011), will teach a course in the UMass Lowell History Department, titled “The First Globalization: The Portuguese and the Age of Discovery” (History 43.390.201, T/Th, 2:00-3:15; classes begin on January 20, 2015), and will collaborate in various initiatives of the Saab-Pedroso Center, including the delivery of a public lecture, “Empire, Religion, and Utopia in the Early Modern Portuguese World,” on Tuesday, March 31 at 5:30 p.m. at the Allen House, in partnership with the History Department.

In a press release, the University of Massachusetts Lowell has stated “it is grateful to the Luso-American Foundation for its generous support of this academic initiative and looks forward to a long-term partnership in the promotion of the Saab-Pedroso Center for Portuguese Culture and Research and the Portuguese Studies Program in the Department of World Languages and Culture.”

Established in 2013, the Saab-Pedroso Center for Portuguese Culture and Research offers Portuguese language and culture courses with the objective of establishing a minor and a Bachelor of Arts in Portuguese at the University of Massachusetts Lowell.