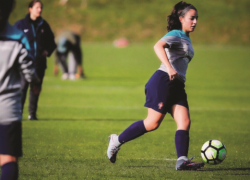 Veronica Lage has fulfilled a dream as she recently trained on the same fields that Cristiano Ronaldo plays on.

Veronica has become so proficient in soccer that she trained in Portugal with their Girls-Under-16 National Team. The Yorktown Heights resident was first registered in the Eastern New York Youth Soccer Association (ENYYSA) when she was just five years old.

Veronica, who turns 16 years old this month, is eligible to play for Portugal as both her parents are Portuguese and she holds dual citizenship. 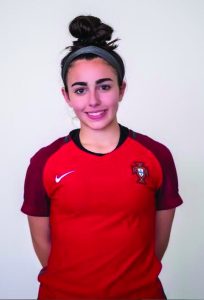 In the East Hudson Youth Soccer League (EHYSL), Veronica has played for Shrub Oak Girls United. Currently a sophomore at Lakeland High School, she started 13 games in defense and midfield last fall, scored her first varsity goal and was honored as the Most Improved Player by the coaching staff.

Veronica explained that all her new teammates are very talented and highly skilled. They were also very welcoming, helping her if something got lost in translation, as did the coaches, who sometimes explained what needed to be done to Veronica in perfect English.

She said that “what was really cool is that training took place at the Cidade do Futebol, soccer city. This is where all Portuguese national teams train. This is where Ronaldo trains! All of the national team trophies are there, and the memorabilia. My Dad loved taking pictures with all the trophies. On our last night, we stayed in the Pestana CR7 Hotel, and it’s a Cristiano-themed layout. The whole experience was all very cool!”

With over 100,000 youth soccer players––both boys and girls––and more than 25,000 volunteers, the non-profit Eastern New York Youth Soccer Association (ENYYSA) stretches from Montauk Point, Long Island to the Canadian border. Members are affiliated with 11 leagues throughout the association, which covers the entire state of New York east of Route 81. ENYYSA exists to promote and enhance the game of soccer for children and teenagers between the ages of 5 and 19 years old, and to encourage the healthy development of youth players, coaches, referees and administrators. All levels of soccer are offered––from intramural, travel team and premier players as well as Children With Special Needs. No child who wants to play soccer is turned away. ENYYSA is a proud member of the United States Soccer Federation and United States Youth Soccer Association. For more information, please log onto http://www.enysoccer.com/, which receives nearly 300,000 hits annually from the growing soccer community.