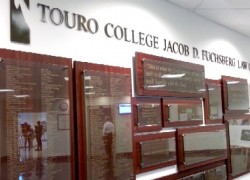 On Tuesday November 12, Touro Law Center Center will join with the Sousa Mendes Foundation and the Long Island Portuguese community to honor the memory of Aristides de Sousa Mendes during an event marking the 75th Anniversary of Kristallnacht.

Aristides de Sousa Mendes, known as the “Portuguese Schindler,” was a Portuguese diplomat in France during WWII who disobeyed the orders of his government and granted visas out of the Nazi-occupied country to 30,000 refugees, including 12,000 Jews. Sousa Mendes’ effort during the war has be regarded as “the largest rescue action by a single individual during the Holocaust.”

The event, which will be held at the Touro Law Center in Central Islip (founded by a Portuguese descendant), will start with a reception at 6:00pm followed by a presentation of the Sousa Mendes film Disobedience: the Sousa Mendes Story, at 6:30 pm, introduced by Dr. Olivia Mattis, a daughter and granddaughter of Sousa Mendes visa recipients and Vice-President of the Sousa Mendes Foundation. 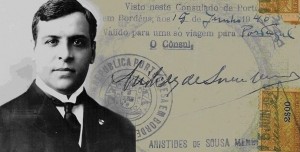 Consul Aristides de Sousa Mendes. In the background, one of the 30.000 refugee visas signed by him.

Immediately after the film, Touro Law professor Dan Subotnik, whose parents were rescued by Sousa Mendes, will lead a panel discussion with Dr. Mattis and special guests that include NY State Senator Jack Martins, the highest elected Portuguese-American in New York State; Hon. Paul Pereira, Portuguese historian and Deputy Mayor of Mineola (home of Long Island’s largest Portuguese population); and other faculty and prominent leaders of the Portuguese community.

Concluding the event, Dean Patricia Salkin will join with Professor Subotnik, Dr. Mattis and the leaders of the Portuguese community to unveil a plaque donated at the Law Center dedicated to the accomplishments and memory of Sousa Mendes. A copy of Sousa Mendes’ autobiography, Aristides De Sousa Mendes: Um Heroi Portugues (A Portuguese Hero), signed by all the dignitaries in attendance, will also be presented to the school for circulation in the Gould Law Library.

The event is free and open to the public. Touro Law Center is located on 225 225, Eastview Drive, Central Islip, NY ,11722. Contact Gabriel Marques at Gabriel-marques@tourolaw.edu