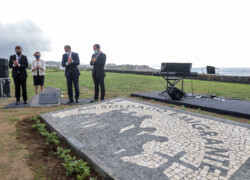 The President of the Regional Government of the Azores, José Manuel Bolieiro, dedicated on Sunday the Emigrant Soldier Memorial [Memorial ao Soldado Emigrante], in Praça do Emigrante, Ribeira Grande, on São Miguel island.

The Memorial, sponsored by the  Azores Emigrants Association (AEAzores), honors all Portuguese emigrant military who have fought, are fighting or died serving the Armed Forces of the host countries.

At the ceremony, President Bolieiro emphasized the role of the Azorean diaspora as a source of pride for the Azores, through asserting itself in the host countries in areas such as politics, economics, and culture.

“Our diaspora is a source of pride for the Azores, not only because they left from here, but because they have asserted themselves successfully in the host countries,” said President Bolieiro.

He appealed to emigrants of Azorean descent “to continue to look at the Azores from their hearts and souls, with nostalgia, and the desire to visit and invest in the Region.”

The ceremony was also attended by the mayor of Ribeira Grande, Alexandre Gaudêncio, and the Regional Director for the Communities, José Andrade.

The current year marks the centenary of the fallen soldiers in the fields of northern France, Belgium and other war theaters during the WWI. Since then, many emigrant military of Azorean descent have participated in armed conflicts under the flags of host countries such as Canada, Brazil, and the United States – in places such as Europe, the Middle East, Asia and Africa. 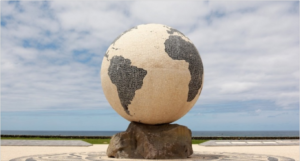 Another view of the Emigrant Soldier Memorial

Therefore, according to the Azores Emigrants Association, the Emigrant Soldier Memorial “is a unique monument, evocative of the emigrants who fought or are fighting under the flags of their host countries.” It is a tribute to those who, “departing for distant lands, in search of a better future, faced the most diverse obstacles that emigration demands, and dedicated their lives to the service of the Armed Forces of their adopted countries.”